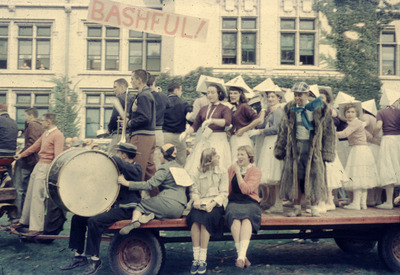 This photograph captures the Sixth Section bandwagon, with the "Pyramids" riding along. The Sixth Section was a social and Greek organization (fraternity) known as Phi Sigma Alpha. The "Pyramids" are the women wearing the white triangular/pyramid-shaped hats, and are a part of a social and Greek organization (sorority) known as Delta Delta Rho. There is a sign above the bandwagon that says, "Bashful!". The bandwagon is stopped in front of Kauke Hall. There is no date given for this photograph.