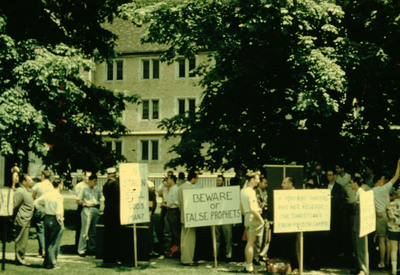 This photograph captures the protestors during the visit of the Russian church leader. One of the signs in the photograph says, "Beware of False Prophets". This protest is likely an anti-Communist protests against the church leader. It is also likely that that the individuals in the photograph are not students, but in fact, citizens of Wooster. During this time, there was a professor on campus that had some trouble with people because he had his degree in Russian Literature, and people assumed he was consorting with Communists/was sympathetic to the Communist cause.