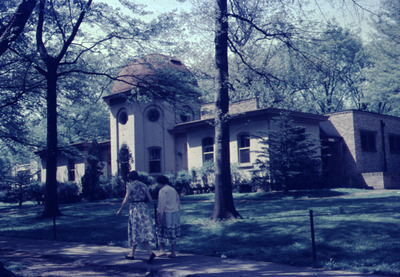 Photograph depicts two women walking outside of the Student Union, which was located in the old observatory. The observatory was redesigned in 1941 as the Temporary Union Building (T.U.B.), which housed the Student Union. This building was located where Andrews/Gault Libraries currently stand on Beall Ave. It was once again renovated in 1989 as the Rubbermaid Student Development Center. Eventually, the entire building was picked up and moved behind Holden Hall and became a dormitory for students. This photograph was taken in May of 1956.