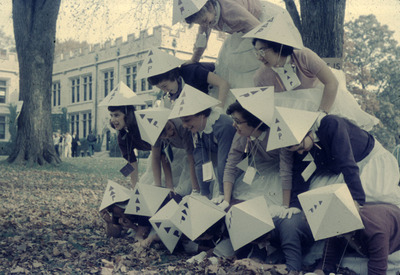 This photograph depicts a group of women in pyramid position. These women are a part of the "Pyramids", which was a social, Greek, organization (sorority) known as Delta Delta Rho. The women are wearing pyramid-shaped white hats with the greek letters of their organization on the side. It was noted on the slide that "Koko" was on the second tier of the pyramid.