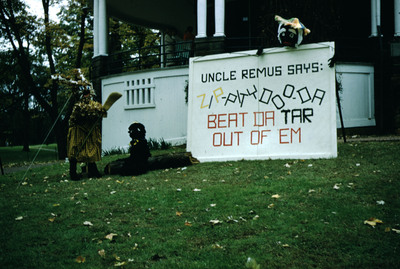 This photograph depicts three characters with a sign that says "Uncle Remus Says: Zip-pity doo da Beat da Tar out of 'Em" during the Homecoming game of 1959. The 1959 Homecoming football game was against Akron, played at Wooster. The activities depicted in the photograph may have been associated with Greek life on campus at the time. The character of Uncle Remus has significant historical context. He is a fictional character and narrator in a number of African-American folktales that were adapted/compiled by Joel Chandler Harris in 1881. The stories and Harris' collection led to much controversy in the following years.

Digital Collections recognizes that the image portrayed here contains racist imagery. We have chosen to include it in the collection because we have a policy against selective omission and because we are committed to representing our institution's history as accurately as possible. The behavior depicted in the image is in violation of college policy and does not, in any way, reflect the values of Digital Collections.