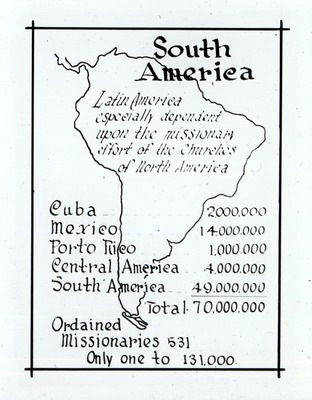 Slide depicting a line drawing of South America. The title "South America" is visible towards the upper portion of the image. Italic text in the image reads "Latin America especially dependent upon to missionary effort of the Churches of North America". Superimposed over the lower part of the image are population figures for the following states: Cuba, Mexico, Porto Rico (sic), Central America, South America, which are all added together for a grand total figure of 70,000,000. Below the image, text reading "Ordained Missionaries 531, only one to 131,000". All of the above is enclosed in a plain, black box. This image comes from a collection of ten slides pertaining to Wooster missions.

The College of Wooster Special Collections

This is one of 49 Lantern Slides in the Buildings and Grounds Collection.